Alexander has a YouTube channel where he will be posting instructional painting videos. Talking about his work. Interviewing other artists he admires. The first video in this series is an interview with Alexander by the writer, solicitor and general brain box Ronan Sheehan, directed by Paco Suarez. 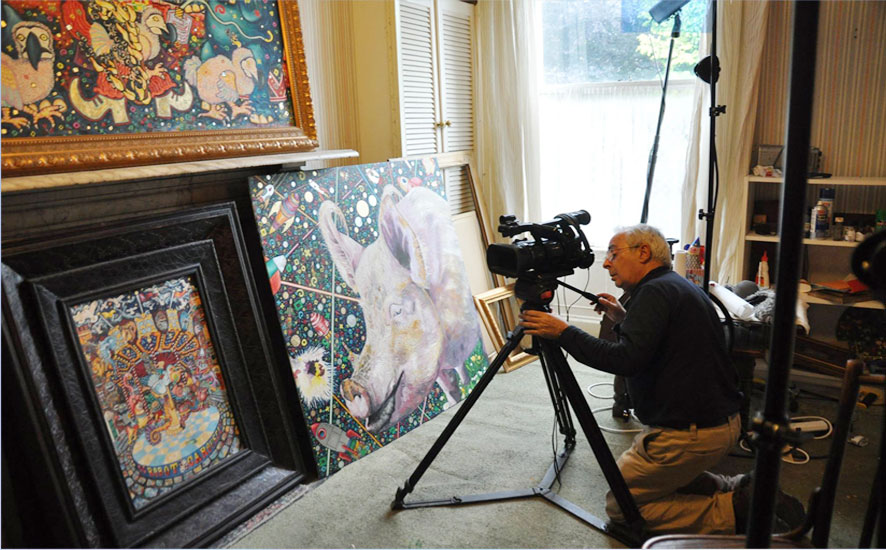 The Maharajah, the Spy, the Giant and the Robot (Series)

My novel is about forty thousand words and is aimed at nine to twelve year old’s, it is the first in a series.

Half the adventure takes place in a fictional city in Rajasthan India (loosely based on Jaipur, a city I have had the pleasure to live in.) The other half is set in the Irish countryside. The book spans thirty years of a Maharajah’s life, his attempt to reclaim his forgotten family’s power in modern, democratic India. He grows up alone in an abandoned palace, his only friends empty suits of armour who the Maharajah names and talks with as if they are real people.

As he comes of age he discovers he has secret servant girl Pallavi, she confides that his parents were murdered by the humongous antiques dealer Bajaar Jind. The Maharajah plans a series of inventive ways to invade the modern world and seek his revenge. When he leaves the Palace, the Maharajah asks for her hand in marriage, she agrees but wants to honeymoon in Ireland. The triumphant Maharajah, having built a magnificent stream engine to escape his palace prison and defeated his enemy Bajaar Jind, decides to become a great inventor so that he can bring his best friend, a smiling suit of armour, to life.

The other half of the adventure is told in Ireland some fifteen years later and features a Robot, who having never worked, wakes up when a robin’s egg lands in his chest. Love blossoms between the bird and the metal man. The Robot makes his way across the Irish countryside, covered in mud and branches and thinking himself a tree, becomes a figure of legend to local children, until one Halloween he visits the town and saves the day by entering a burning house and rescuing a little boy. The Maharajah (now fifteen years older) discovers when watching television that his Robot invention has come alive and the Robot discovers through an inscription on his arm he is the invention of an Indian king. The book ends as they both set out on a journey to find each other.